We recently told you about the Museum of Waterways and Industry in nearby Seneca Falls, NY.  We also mentioned that from the museum you could look across the river to see the old Knitting Mill and Foundry, still standing proudly on the banks of the Cayuga-Seneca Canal.  What we didn’t tell you at the time is that not only do these buildings hold plenty of industrial history, but they will also play a major role in preserving the social history of our great state in the near future.  Today, when you visit the old Knitting Mill and Foundry, you’ll be visiting the future home of the National Women’s Hall of Fame!

But a National Women’s Hall of Fame?  In Upstate New York?  Why in the world would this be located here?

Throughout time, women have been key in a family and household, doing what was needed to help make life livable for her husband and children (and sometimes her extended family).  The early years of United States History were especially rough on women, who traveled with their husbands to make a new life in uncharted territory of our nation’s newly discovered land.  While men worked in the fields, or procured jobs for income, the women stayed at home to cook; clean; make, wash and mend clothing; help take care of livestock; raise the children; teach the children; and so much more.  It can be argued that women did just as much as men to make life comfortable for their families in the early days of the U.S.  But the times were the times, and men and their views were valued much more than women’s were, and it was the men who ran the government, voted, and had the majority of rights in our young nation.

It just so happens that MANY U.S. citizens, both men and women, believed that women had every right to be treated equal to men in the eyes of the law, and that women should have the right to vote.  And it just so happens that, in 1848, Seneca Falls was the location for the very first women’s rights convention!  68 women and 32 men gathered here to discuss the problem of women’s inequality.  After two days of talks and deliberation, the group documented these injustices in the Declaration of Sentiments.

The Declaration of Sentiments?  Okay, so you may not have heard of the document, but you’ve SURELY heard the quote “We hold these truths to be self-evident: that all men and women are created equal; that they are endowed by their Creator with certain inalienable rights; that among these are life, liberty, and the pursuit of happiness…”  Yep, this document is the source of that very quote.  The verbiage also goes on to make a very effective argument as to men’s responsibility for treating women like possessions and making them, “in the eye of the law, civilly dead.”

The document then goes on to outline all of the social and legal rights that should be bestowed upon women to recognize them as human beings with rights.

It took a very long time, 71 years to be exact, for the Federal Government to do anything about this injustice.  But finally, in 1919, the Senate and Congress passed the federal woman suffrage amendment (penned by Susan B. Anthony), and in 1920, the 19th Amendment was added to the U.S. Constitution, granting women the right to vote.

Is it any wonder we’re so proud of the history that started right here in the Finger Lakes? 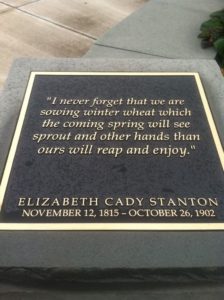 The National Women’s Hall of Fame honors this history, and goes a step further by inducting great women into the hall who have made a difference in society, and the world, by making “contributions… of national or global importance and of enduring value” towards our Country’s development.  Of course, Susan B. Anthony was one of the very first women honored, along with the likes of Harriet Tubman, Helen Keller, Amelia Earhart, Clara Barton, and Eleanor Roosevelt.

To date, 256 women have been inducted into the Hall of Fame.  Many are well-known names (Annie Oakley, Billie Jean King, Ella Fitzgerald, Georgia O’Keeffe, Janet Reno, Louisa May Alcott, Oprah Winfrey, Sally Ride), and many more whose names may not ring a bell… until you realize their contributions to the world!

The National Women’s Hall of Fame is currently located at 76 Fall Street in Seneca Falls, however their goal is to completely renovate the historic Knitting Mill complex and make it into a combined museum/event hall/education center.  For the time being, the Hall of Fame is open each Wednesday through Saturday from 10am to 4pm, and on Sundays during summer months from 12pm to 4pm.  Admission is a VERY reasonable $3 for adults, $1.50 for Students and Seniors, and $7 for families.  Children 5 and under are admitted for free.

The National Women’s Hall of Fame is an easy drive through Finger Lakes Wine Country from The Inn at Gothic Eves, and is a great way to combine some wine-tasting with true appreciation for our area’s rich history!